How an equality approach on an unequal world maintains (and worsens) inequality.

I was recently asked to give the keynote address for a youth leadership conference. In the invitation, they informed me that the conference theme was inequality and that I had only 10 minutes to speak.

And so as I thought about what to say regarding inequality, I easily came to the conclusion that there is no way I can get too deep into this very complex and widespread issue in such a short amount of time. But the good thing about this request was that it forced me to narrow down on what I think are the most important points future (and current) leaders need to know about inequality. To this end, I present below some of my thoughts on various forms of inequalities and what I think should be driving our efforts to address them.

The Who, What, Where, When, and Why of Inequality

There are inequalities between men and women, between racial and ethnic groups, between LGBTQ people and non-LGBTQ people, between the wealthy and the poor, between religions, between countries, and between people of different abilities.

These inequalities are not new issues and are not only happening in few isolated places. Instead, inequalities have been affecting millions of people all over the world for many generations.

And as for why inequalities exist, well, it is important to note that inequalities do not exist simply because some people are inherently inferior—which seems to be a belief that many people hold. 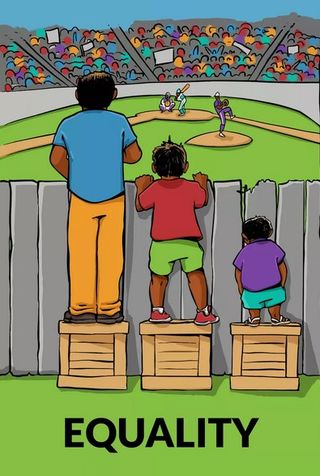 You may have already seen this popular equality meme. Regardless of whether it was intentional or not, this image presents inequality as existing because of physical or biological differences between people. The image propagates the (racist, sexist, heterosexist, classist, ableist, etc.) myth that some people are struggling or behind simply because they are less developed, immature, uncivilized, less intelligent, or just of lower status in some way—that these inequalities are natural. But in reality, the inequalities that exist in our world are not because of some inherent characteristic. Instead, we must remember that inequality is a result of hundreds of years of exploitation and oppression. Therefore, instead of the popular meme, I propose a more accurate visual representation of inequality below.

With this modified image, it is conveyed that exploitation and oppression happened historically—and are still happening contemporarily—and that such atrocities created and continue to maintain inequalities between people. It is also clear in the modified image that the inequalities are not due to some inherent inferior characteristics of some people or the natural superiority of some people, but instead are due to unfair systems/institutions that were developed and designed to benefit some people while keeping other people down. 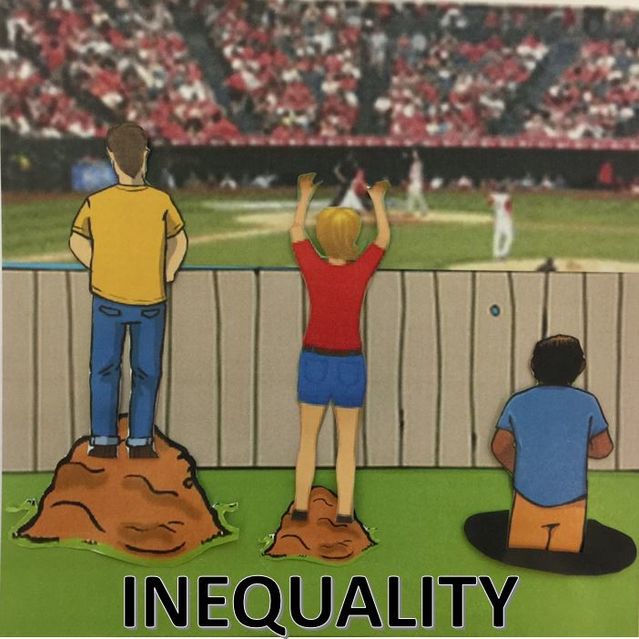 So now that we have a more accurate understanding of inequality, what can we do to address it?

During one presentation of mine, I asked the audience of approximately 300 people to raise their hand if they think that the solution to inequality is equality. And an easily overwhelming proportion of the audience—approximately two thirds—raised their hand. It is not surprising that most people quickly think of equality as the solution to inequality; they are, after all, conceptual opposites so it seems logical! Also, the concept of equality sounds and looks good, thus, for many leaders who are attempting to address inequality, an equality approach provides “good optics” that is safe from further criticism. Indeed, on the surface, an equality approach is attractive because it promotes the intention to treat everyone the same, give everyone the same things, and give everyone equal amounts. In short, an equality approach is consistent with egalitarian values, promotes sameness, and reflects fairness.

But the fairness it exudes is just an illusion.

As we can also see in the popular image above, where each person was given one crate to stand on, an equality approach is not really fair as one crate is not enough to equalize people. Similarly, if we use an equality approach on the modified inequality image I proposed, we see the same effect: some people still end up with more land and resources to stand on than other people. Therefore, inequalities still persist. 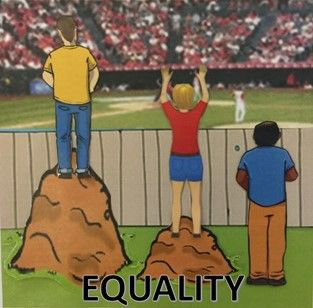 Therefore, although it may look good on the surface, a deeper look reveals that an equality approach can only work if everyone starts from the same place or level. An equality approach does not correct for historical and contemporary injustices. Furthermore, an equality approach to an unequal reality only maintains inequality—perhaps even worsen and further spread inequality. Indeed, some important questions to ask are “Where did the additional resources come from? Who ended up being exploited and oppressed so that more land and resources can be brought over and equally distributed to some folks so they can watch baseball?”

To this end, I present the image below that summarizes these points. 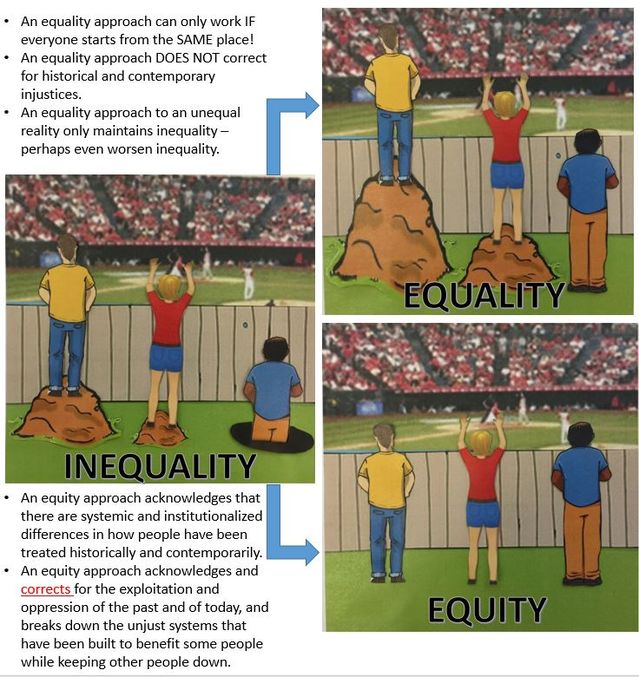 The reality is that there are inequalities in our world. These inequalities are not because of some inherently inferior characteristics that some people have. Instead, we must remember that inequality is a result of hundreds of years of exploitation and oppression. Further, these inequalities were created and are maintained by systems and institutions to benefit some people while keeping other people down.

To address inequality, we need leaders who are ready and willing to get into necessary trouble!

P.S. – Another set of important question to ask in these images are: “Why are we forced to watch baseball anyway? Who got to decide that watching baseball is an important thing to do?” Perhaps for another blog.