What Is ‘Malicious Mother Syndrome’?

Divorce and custody proceedings are often high-stress, contentious events that can cause extreme behavior on the part of those involved. Some cases have resulted in situations tied to what is often called “Malicious Mother Syndrome” or “Malicious Parent Syndrome.” This syndrome was first theorized by the psychologist Ira Turkat to describe a pattern of abnormal behavior during divorce.

It is important to note that Malicious Mother or Malicious Parent Syndrome is not currently recognized as a mental disorder by the medical profession. Rather, the syndrome describes a type of behavior at issue in some court cases and has lead proponents to call for further study and research.

When this syndrome occurs, a divorced or divorcing parent seeks to punish the other parent, sometimes going far enough as to harm or deprive their children in order to make the other parent look bad. Though most commonly called Malicious Mother Syndrome, both mothers and fathers can be capable of such actions.

In his initial discussion of Malicious Mother Syndrome, Dr. Turkat sought to identify and describe a condition where one parent acts purposefully and vengefully towards the other during or following divorce.

Malicious Parent Syndrome is characterized by four major criteria. Someone suffering from the syndrome:

The idea of identifying a syndrome or mental disorder to explain the actions of extreme malicious behavior by parents during divorce arose from examples of vindictive parents in clinical and legal cases. Some of these behaviors include burning down the house of an ex-spouse, falsely accusing the other parent of abuse, or purposely interfering with planned parenting time.

In one particular example that could be called an instance of malicious parent syndrome, a mother told her children they could not afford food because their father had wasted all their money. In another, a parent repeatedly misinformed the other parent about school activities, so that the parent could not participate in the child’s school life. In all of these actions, the intent is to harm the other parent.

When one parent goes out of his or her way to hurt the other, great strain can be put on both the harmed parent and their relationship with the child. In some cases, a parent who is repeatedly subjected to malicious acts by their ex-spouse may withdraw from their child’s life in order to avoid further conflict. A malicious parent may also successfully manipulate a child, resulting in them disliking and wanting to spend less time with the other parent.

Many of the behaviors associated with malicious parent syndrome can have legal consequences and may constitute civil and criminal law violations.

Some actions related to Malicious Parent Syndrome can be easily understood as criminal acts, such as attacking the other parent or damaging their property. Depriving children of food or money, in order to make the other parent look bad, could constitute a form of child abuse, which can violate both family and criminal laws. Similarly, should a malicious parent lie under oath, he or she may be charged with the crime of perjury.

Other acts related to Malicious Parent Syndrome may be violations of civil law. For example, denying a parent their court-ordered visitation rights can constitute illegal parent time interference and can result in fines, court-ordered counseling, and adjustments to custody and visitation plans. Lying about the acts of the other parent in a way which harms his or her reputation and results in actual injury can constitute defamation.

Malicious behavior by a parent can also impact parenting plans and custody arrangements. If a parent has been involved in alienating, cruel or illegal behavior, this conduct can be considered a factor in any proceeding to gain or adjust custody.

If You’ve Been the Victim of a Malicious Parent

If you or your children have been the victim of an ex-spouse’s vengeful behavior which may be a result of Malicious Mother or Malicious Parent Syndrome, you’re not without recourse. You may be able to:

Parents want nothing more than for their children to have the best possible start to their lives, so it can particularly upsetting when a malicious parent stands in the way. But there are legal processes in place to help resolve these issues, which are best navigated by an experienced family law attorney

Section 241 of Title 18 is the civil rights conspiracy statute. Section 241 makes it unlawful for two or more persons to agree together to injure, threaten, or intimidate a person in any state, territory or district in the free exercise or enjoyment of any right or privilege secured to him/her by the Constitution or the laws of the Unites States, (or because of his/her having exercised the same). Unlike most conspiracy statutes, Section 241 does not require that one of the conspirators commit an overt act prior to the conspiracy becoming a crime.

The offense is punishable by a range of imprisonment up to a life term or the death penalty, depending upon the circumstances of the crime, and the resulting injury, if any.

If two or more persons conspire to injure, oppress, threaten, or intimidate any person in any State, Territory, Commonwealth, Possession, or District in the free exercise or enjoyment of any right or privilege secured to him by the Constitution or laws of the United States, or because of his having so exercised the same;… 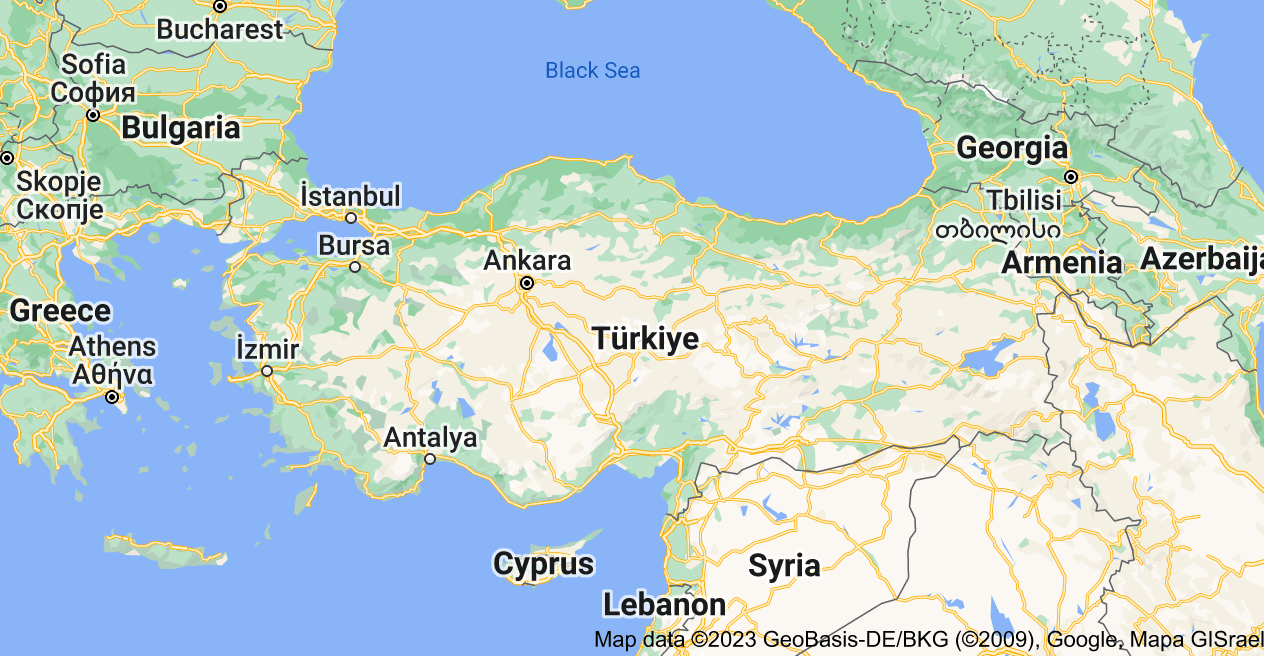 Fadi Hakura is a Turkey expert and associate fellow at Chatham House, the Royal Institute of International Affairs, an independent policy institute based in London. The opinions expressed in this commentary are his.

Turkey’s national currency, the lira, has tumbled by nearly 40% against the US dollar so far this year.

Relations between the two countries reached a low point on Friday, as US President Donald Trump approved the doubling of tariffs on Turkish steel and aluminium in response to Turkey’s refusal to release Andrew Brunson — an American pastor who is under house arrest in Turkey and facing terror charges.
Turkey’s President, Recep Tayyip Erdogan, has so far resisted pressure to implement monetary and fiscal orthodoxy, choosing instead to lash out at both the financial markets and the US. 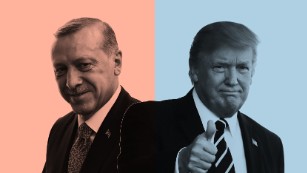 Turkey is trying to offload its problems onto Trump
He has suggested that there is a global plot that aims to destroy Turkey’s political and economic achievements.
So far, his domestic popularity has been on the rise, as he taps into the anti-US sentiment (and willingness to believe in conspiracy theories) that exists among much of the Turkish population.
ADVERTISING
inRead invented by Teads
Erdogan’s stubborn response to Turkey’s economic meltdown has resembled the populist playbook of Venezuelan President Nicolás Maduro, rather than the market-friendly posturing of Argentinian President Mauricio Macri.
Turkey, unlike Argentina, does not seem poised to turn to the International Monetary Fund in order to stave off financial collapse, nor to mend relations with Washington.
If anything, the Turkish President looks to be doubling down in challenging the US and the global financial markets — two formidable opponents.
US sanctions Turkey over detention of pastor 04:43
In all likelihood, Turkey will lose any fight it picks with New York, London, Singapore and other bastions of finance — unless a ceasefire is declared. And the lira’s collapse will translate into a financial and economic meltdown for Turkey.
As that process unfolds, it will likely undermine Erdogan’s domestic appeal, even among his most committed ideological supporters, and unleash political instability in its wake.
But the outcome will be a long, drawn-out and complex affair that could promote military interference in politics and generate ramifications beyond Turkey’s borders.
Turkey would probably no longer view the US as a reliable partner and strategic ally.
Whoever ends up leading the country, a wounded Turkey would most likely seek to shift the center of gravity away from the West and toward Russia, Iran and Eurasia.
It would make Turkey less in tune with US and European objectives in the Middle East, meaning Turkey would seek to assert a more independent security and defense policy. 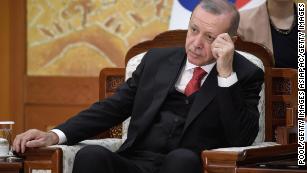 Turkey’s Erdogan defiant in the face of US tariffs, sanction threats
In extreme circumstances, it could even contemplate withdrawing from NATO and terminate — or radically amend — its customs union with the EU.
No scenario can be overlooked should the worst happen and political and economic turmoil leaves devastation in a country as geopolitically critical as Turkey.
Given the potential calamitous outcome, it would be very sensible for the West to prepare an ambitious package to alleviate the aftereffects of the financial tsunami and to ensure that Turkey does not drift from the Western norms and institutions.
Turkey’s EU accession ambitions need to be urgently revived to encourage liberalizing reforms. Otherwise, the West will pay a heavy price for losing such an important country as an ally