An eye on Russia and North Korea, Marines prepare to fight in the cold

The Marine Corps has been ramping up its preparations for potential cold-weather conflicts in places like Russia or North Korea, per Marine Corps Times. Marine Commandant Gen. Robert B. Neller said last month at CSIS: “There is a possibility we are going to be there.”

Why it matters: The Marine Corps is behind our allies and enemies in preparing to fight in such conditions, per Marine Corps Times. “We haven’t been in the cold-weather business for a while,” Gen. Neller said. Many Marines are used to training for battles in desert-like terrains in the Middle East, as opposed to icy, snowy, and mountainous terrains, which require vastly different skill sets.

History: The Marine Corps hasn’t fought in icy or snowy terrain since the Korean War about 70 years ago. Before that Marines occasionally trained by the North Pole and in Iceland.

Two rotations of hundreds of Marines have been deployed in Norway for a year to practice winter training. Another rotation is expected to deploy this spring.

In cold weather, Marines need to wear extra layers, which can change how mobile they are and how quickly they fatigue. Marines also need to consume more food in such conditions.

The FBI was warned in September about a possible school shooting threat from a YouTube user with the same name as the suspect in Wednesday’s campus massacre in Parkland, Florida, according to a video blogger. 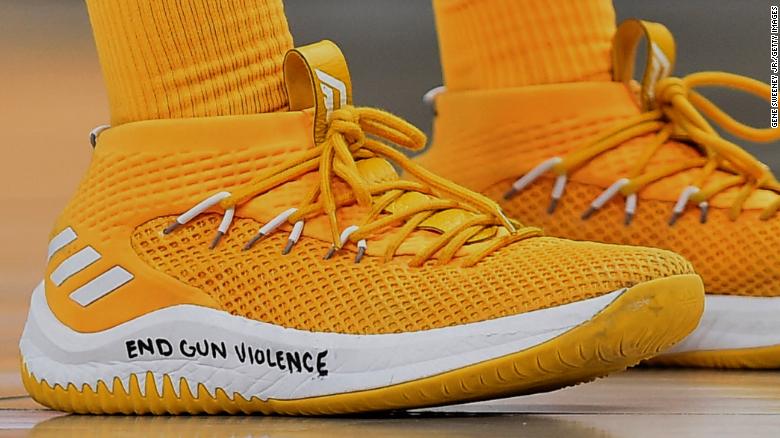 (CNN)Parkland, Florida may be more than 2,500 miles away from Salt Lake City, Utah, but the Florida school shooting was close to the mind of NBA player Donovan Mitchell. Or more accurately, his feet.

Mitchell, a guard for the Utah Jazz, wore bright, yellow shoes during his team’s game Wednesday night against the Phoenix Suns that both called for a stop to gun violence and asked for prayers. Written in black on the side of one shoe was “End Gun Violence.” On the other shoe was written “Pray for Parkland.”

‘There’s nothing being done’

A native of Connecticut, Mitchell told reporters when he heard about the shooting at Parkland’s Marjory Stoneman Douglas High School that killed 17 people he thought about the 2012 school shooting at Sandy Hook Elementary in Newtown, Connecticut.
“My mom’s a schoolteacher. I was about 15, 20 minutes away during the Sandy Hook shooting. It’s kind of scary,” said Mitchell, a candidate for the NBA’s Rookie of the Year. “I’m not saying all shootings make me feel the same way, but especially school shootings, with my mom being a nursery teacher, it’s kind of scary that that could happen at any moment, anywhere.”
Twenty children and six adults were killed at Sandy Hook in December 2012 by 20-year-old Adam Lanza, who had earlier killed his mother, Nancy Lanza, in their home.
Mitchell said he was praying for the families of the victims in the Florida shooting and feels the nation needed to do more to stop the violence.
“A lot of people, we talk about it, and there’s a lot of so-called awareness of it, but there’s nothing being done,” he said. “I looked something up, and the same gun that was used in Vegas, Orlando, Sandy Hook, and I’m missing more. It’s interesting how it just continues to happen, and the movement doesn’t do much.”

(CNN)Here is a list of incidents of random elementary, middle and high school (excludes colleges and universities) violence with fatalities, from 1927 to the present. This list does NOT include suicides, gang-related incidents, or deaths resulting from interpersonal conflicts.