I write about interesting Chinese companies 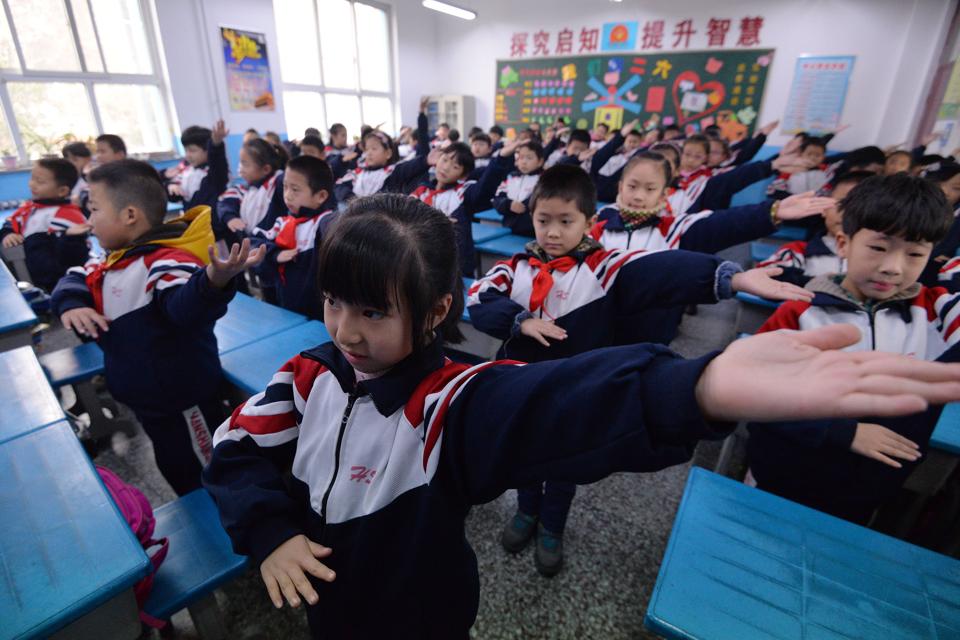 Pupils do exercise in a classroom in China’s Hebei province.(Photo by VCG via Getty Images)

If there is one thing Jing Jing thinks her four-year-old daughter Jenny should start learning early on, it would be English. The 31-year-old college professor, who lives in Beijing, wants Jenny to speak the language just like a native, so she can become a global-minded person and have more job opportunities when she grows up.

To that end, Jing doesn’t want just any English teacher for her daughter. She pays 5,980 yuan ($750) for a total of 48 online courses where a certified U.S.-based instructor tunes in through live video to remotely teach Jenny every week.

“Learning from a native speaker will give Jenny the right accent,” Jing told Forbes. “The younger she starts the better, because she will accept English as a normal way of communication.”

In China, there are tens of millions of eager parents like Jing. Unsatisfied with Chinese classrooms’ stilted teaching style – and armed with the belief that good English skills are a necessity in the increasingly global China – they want to connect directly with teachers from the U.S. The demand has given birth to a multi-billion dollar online education market, where Chinese startups scour the U.S. and Canada to bring local language curriculums and instructors to their home country via live streaming technology.

The process works like web conferencing. During lessons, which usually last for 30 minutes, students sit in front of their computers and watch their teachers speak while they’re halfway across the world. The tutors will go through teaching materials designed by their Chinese employers, who often borrow from U.S. elementary school curriculums, while using quite a lot of hand gestures to explain basic English to Chinese children mostly aged between 5 and 12.

Last year, the market for online language lessons in China stood at 30 billion yuan ($4.5 billion), according to consultancy firm iResearch. Between now and 2019, it is projected to grow more than 20% a year to reach 52 billion yuan ($7.8 billion), when the country’s entire online education sector will be valued at 270 billion yuan ($41 billion).

“Chinese people, especially those born after 1980, grew up with much more exposure to foreign culture,” said Zhang Yiwei, an analyst with consultancy firm JMDedu. “When they become parents, they want their children to speak English very, very fluently.”

Investors are taking note. In August, VIPKid, a Beijing-based online English tutoring startup, raised $200 million from prominent investors including Chinese gaming and social media giant Tencent Holdings and investment firm Sequoia Capital China. The firm, which says it expects to generate 5 billion yuan ($750 million) in revenue this year, is said to be valued at $1.5 billion, four years after it was founded in 2013. China Online Education Group, also known as 51 Talk, went public in New York last year. And iTutorGroup was valued at $1 billion in a 2015 funding round that included Goldman Sachs and Singapore sovereign wealth fund GIC.

I write about interesting Chinese companies 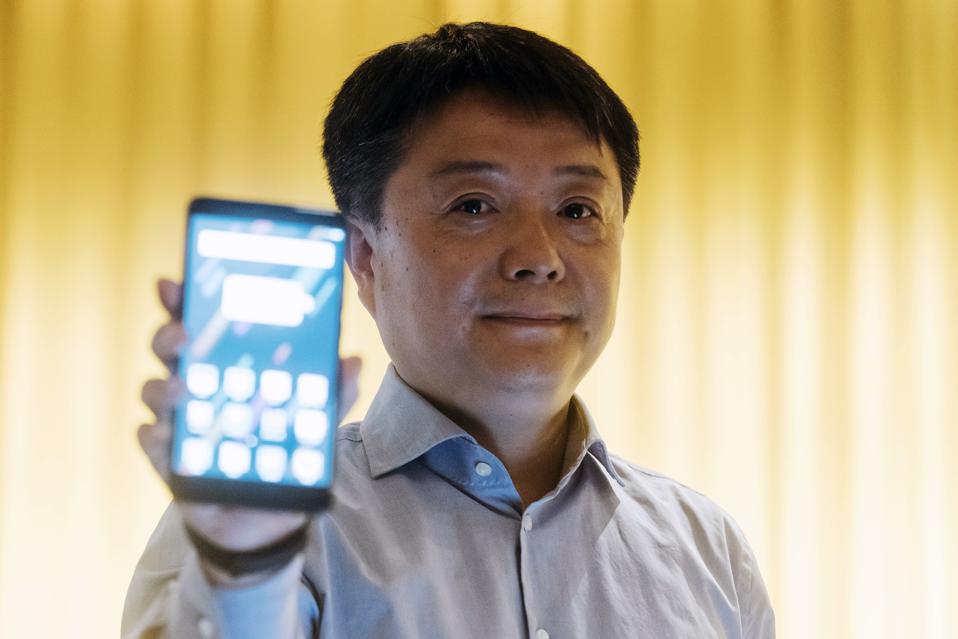 After resuming growth this year following repeated setbacks at the hands of local competitors, Chinese smartphone maker Xiaomi has set its sights on international markets to sustain this hard-earned momentum.

Over the past three years, Xiaomi has entered as many as 40 countries across regions, selling its phones and smart devices at cost to compete with brands like Apple and Samsung as well as China’s own Huawei, OPPO and Vivo for the attention of users in countries like India and Russia. The pace of expansion accelerated dramatically this year, with Xiaomi breaking into a dozen countries including Greece, Indonesia, Paraguay and Poland for the very first time, confirmed the company’s Senior Vice President Wang Xiang in a recent interview with Forbes.

In addition to partnering with online marketplaces and physical distributors in new markets, Xiaomi is also linking arms with Google’s parent company, Alphabet, to beef up its appeal. The company announced on Tuesday its $230 Mi A1 smartphone that will run on Google’s Android One operating platform, which will be the first Xiaomi device that doesn’t use the company’s default MIUI system. The handset, initially available in 40 markets including India, Indonesia, Russia and Mexico, is aimed at attracting users who are more familiar with Google-provided services, according to Wang. He also said that Xiaomi and Google have agreed to share revenues, but declined to provide more details. The Mi A1 will be available for purchase on September 12.

“We are at a key phase of global expansion,” says Wang. “Our users have diverse needs, so stock Android is one of the things we want to try.” 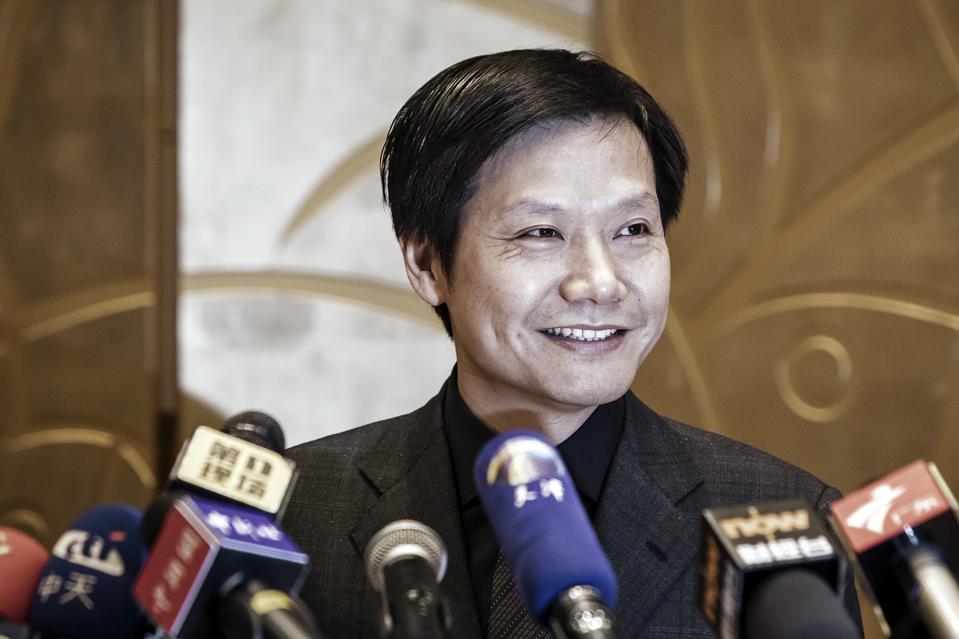 Try Xiaomi must, as international expansion becomes a top priority. The Beijing-based company, whose internet flash sales model propelled it to dizzying heights in 2014, became Asia’s most valuable startup after completing a $1.1 billion financing round in the same year. However, the company has since struggled, losing ground to local rivals who have beaten it to the punch in launching more innovative devices.

Read More: The Dramatic Rise (And Fall) Of Xiaomi

Although Xiaomi’s shipments grew almost 60% in the second quarter this year, it still faces stiff challenges in its home market. The company must defend its online sales from competitors’ equally aggressive internet marketing campaigns, while also racing to open signature retail outlets, taking on the vast retail networks built by Huawei and OPPO, as Chinese consumers now prefer to try devices hands-on before making purchases. This battle is especially challenging for Xiaomi, because China’s surging land and labor costs will pressure its already razor-thin margins, according to analysts.

“Growth in China remains limited for Xiaomi,” said Canalys analyst Jia Mo. “It can still grow a bit, but won’t be able to reach its heyday like in 2015, when Xiaomi was China’s biggest smartphone brand.”

Meanwhile, international markets present an alluring opportunity. Smartphone penetration in Central Europe and Southeast Asia, for example, stands at a respective 54% and 38%. This compares with 91% in the mature Chinese market, according to Canalys data. In addition, Xiaomi’s value-for-money brand image is likely to resonate well in these regions, since many users favor models that can pack the latest features such as dual-lens camera and finger print sensors at lower than $300 – less than half of the price of Apple’s iPhone 7.

Xiaomi has a two-pronged global strategy. Of all its diverse product lines, the company sells just four models abroad – the recently announced Mi A1 and three devices from the cheaper Redmi series – so it can better target digitally savvy but cash-strapped young customers, explains Wang. And having learned a thing or two from its Chinese rivals on the importance of establishing a physical presence, the company is investing in brick-and-mortar retailing across the world, seeking to build 2,000 Mi Home retail outlets globally by 2019, a goal that is twice Apple’s current global store count.

“In most foreign countries, online channels actually account for a very small part of total smartphone shipments.” Wang said. “If we sell online only, it would be difficult to achieve big influence.”

In India, Xiaomi is enjoying moderate success. It is now the country’s second largest smartphone brand by shipment, with a 15.5% market share, after Samsung’s 24%, according to Counterpoint Research. The company is targeting $2 billion in India sales by end of this year.

Other markets where Xiaomi is doing well include Indonesia and Poland. In Poland, for example, its shipment more than doubled from the previous quarter to 220,000 units in the April to June period. And global shipment now accounts for 37% of Xiaomi’s total shipments, according to Canalys.

Read More: Xiaomi Takes Its First Real Step Into The US Market

However, Xiaomi lacks progress in more developed markets. In Taiwan, where it started to sell phones in as early as 2013, the company has less than 2% share of the market today, outranked by a wide margin by more aggressive Chinese rivals such as OPPO, according to Gartner analyst CK Lu. In Eastern Europe, the company doesn’t have the prowess to compete with Huawei, as the smartphone and telecommunication giant has stronger relationships with local carriers, which dominate smartphone sales channels there, according to Canalys’s Jia.

As for the U.S., Xiaomi doesn’t distribute its phones at all. For now, it only sells a set top television box through a number of retailers including Walmart. Wang said Xiaomi would bring more smart gadgets to the U.S. within the next two months but doesn’t have plans to sell smartphones there anytime soon.

“The U.S. market is dominated by carriers,” Wang said. “We have to do a lot of customization and lab tests, but we currently don’t have enough engineers for that.”

In the meantime, Xiaomi’s success in emerging markets isn’t guaranteed. The company is currently stretching itself too thin by selling across the globe, according to analysts.

In fact, there are already signs that Xiaomi can’t have it all. In the Philippines, it shipped only 17,000 smartphones in the second quarter, down from 50,000 in the previous quarter, due to the lack of marketing investments, according to Canalys’s Jia. Last year, the company pulled out of Brazil, beleaguered by a volatile economy and high tax costs.

“Most smartphone companies don’t have the ability and resources to pull off immediate globalization,” said Gartner’s Lu. “They are rather cautious in their global strategies.”

What’s more, competition is ratcheting up, as virtually all of China’s top smartphone makers are targeting India and Indonesia for fresh growth. “It is unclear whether Xiaomi will sustain the momentum in these two countries, as other Chinese companies are aggressive with expansion into these markets alongside the market leader, Samsung, and some local players,” said IHS Markit analyst Ying Yang.

Xiaomi’s Wang, however, remains confident. He pointed to the $1 billion syndicated loan that the company raised in July as part of its resource pool, at a time when the company is expanding a fledgling international team, which now has less than 1,000 people.

“We are financially very healthy,” he insists. “We use our disruptive model to carry out our plans. We aren’t a traditional smartphone company but one that does business through our value-for-money model.”