BERNIE SANDERS On the Issues

The American people must make a fundamental decision. Do we continue the 40-year decline of our middle class and the growing gap between the very rich and everyone else, or do we fight for a progressive economic agenda that creates jobs, raises wages, protects the environment and provides health care for all? Are we prepared to take on the enormous economic and political power of the billionaire class, or do we continue to slide into economic and political oligarchy? These are the most important questions of our time, and how we answer them will determine the future of our country.

GETTING BIG MONEY OUT OF POLITICS AND RESTORING DEMOCRACY

COMBATING CLIMATE CHANGE TO SAVE THE PLANET

WORKING TO CREATE AN AIDS AND HIV-FREE GENERATION

CARING FOR OUR VETERANS

WAR SHOULD BE THE LAST OPTION: WHY I SUPPORT THE IRAN DEAL

HOW BERNIE PAYS FOR HIS PROPOSALS

I Was Tailed by a Private Investigator 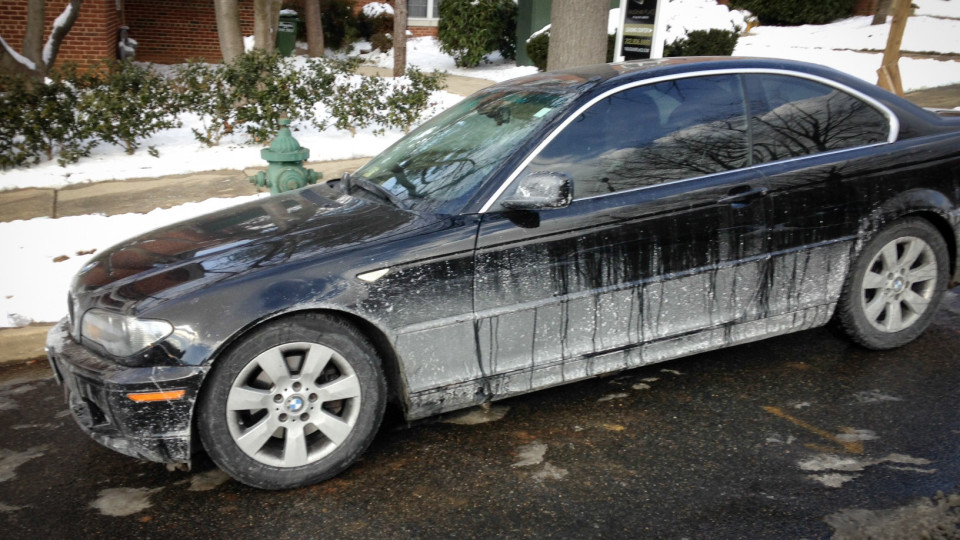 “This is awkward for me,” said the man in the driver seat of the black BMW. “It really is.”

At a glance, he looked like a middle-aged version of Fonzi from Happy Days. He wore a brown leather bomber jacket with a plush fur collar and sported a 1950s pompadour.

His outfit, however, wasn’t the only awkward part. For at least two days, the man, Jonathan Cate, 46, had been trying to surreptitiously follow me in his car around Washington, D.C. A private investigator, Cate was working for a Virginia-based firm called Interprobe. Now the police had made him show his ID, I was at his car window, and he was admitting he’d been hired to tail me.

Cate’s surveillance left me rattled. Constantly being watched in secret can be almost paralyzing for a journalist. Eventually, however, I turned the tables on him. Few things are worse for a private investigator than getting made.

“This is a really bad day,” he said, ruefully shaking his head.

“I’m sorry about that,” I said, as I stood near his car. I was only half serious.

I don’t know exactly when Cate started tailing me, but I first noticed his car early Tuesday morning last week. A snowstorm was coming, and around 8:30 a.m. I rushed out of my house. I was driving my beat-up Corolla toward the hardware store when I noticed a black BMW behind me. I parked across the street, and when the Beamer parked three cars back, no one got out. It was strange.

When I left the hardware store, I saw that the BMW was still parked in the same spot. There was someone inside, though I couldn’t make out what he looked like.

Just for kicks, I hid in a doorway and jotted down the car’s Maryland plates: 7AE3651. As I pulled away from the store, the Beamer followed me, as if I was in some sort of Elmore Leonard movie. When I arrived home, I told my wife what happened and put the note with the car’s plate number in a drawer, just so she’d have it.

I had a story to file around 1 p.m., so I quickly hopped back in my car and headed to a local Starbucks. The snow was just beginning to come down, and the BMW followed me as I drove north.

I parked near the coffee shop, watching over my shoulder as the BMW passed, then made a U-turn. Either the driver thought I was oblivious or he didn’t seem to mind if I spotted him.

Sitting in my car with the engine on, watching this mystery man in the black car, it crossed my mind that I was being paranoid. I called my editor and we went back and forth over who might be tailing me. I’m a national security reporter, and the Justice Department has been cracking down on whistle-blowers. The Obama administration is even threatening James Risen to testify against a source, or face jail time.

But I’m no James Risen. There are few people who would find it worth their while to follow me around town.

Then there was the question of the car. As I explained to my editor, there’s no way a federal agent would drive a BMW on a stakeout. It’s too easy to spot.

Could it be revenge for an old story? Or was it a story that I was doing research on?  Either way, I couldn’t understand what purpose following me would serve. Were they looking for my sources? Or just something embarrassing about my personal life?

My editor told me to sit tight, but if I saw the car again, he advised me to approach the man inside and ask him who he was.

After we got off the phone, I walked into Starbucks to have some coffee and write my story. Not long after I sat down, I saw a man with a gray pompadour shuffle inside and sit nearby. He was wearing loose-fitting pants and looked like he’d just woken up.

Before long he was gone, and I worked for a while. As I left the coffee shop and walked up a hill toward my car, I saw that the BMW was parked behind it. Someone was getting inside.

I ran toward his car and gestured so that he’d lower the tinted window. When he did, I saw that the man with the pompadour was sitting in the driver’s seat. He smiled.

“Are you following me?” I asked. It was a dumb question, and I immediately regretted it.

Then he raised his window and drove away, leaving me standing in the cold.

For the rest of the afternoon, the snow fell furiously, up to 8 inches of it. The next day, the government and schools were closed, I was snowed in and there was no sign of the black car outside.

On Thursday, however, when I left my house early in the morning for Starbucks, I caught sight of him following me as I passed the corner. He was clinging to me like a bad smell. At one point, I almost hit a car in front of me because I was looking in the rearview mirror.

I drove slowly, trying to make sure he didn’t know I was onto him. Soon, I pulled over and emailed my editor, asking him to check the plates of the car.

By noon, when I left the coffee shop, I decided to call the police. The BMW was still tailing me. If I changed lanes, he changed lanes. I didn’t try to lose him, mainly because I didn’t want to cause an accident.

My local police district told me to call 911, so I drove to a quiet residential area with a fountain in the center of a traffic circle and pressed the number on my phone. The BMW followed.

The operator questioned me. “So this person is stalking you?”

“Following is stalking,” the operator replied.

I gave him the BMW’s plate number and waited in my car, trying to look busy so the man with the pompadour wouldn’t get suspicious. Whoever it was, I assumed, wanted to know what I was doing and who I was meeting with, so I figured I’d play the role.

Soon three patrol cars surrounded the BMW. The officers got out of their cars and pulled their guns, which surprised me.

Cate with the police
(ARAM ROSTON/VOCATIV)

The BMW’s driver stepped of the car, too. It was the same man I’d seen in Starbucks, and he smiled nervously as the officers towered over him.

By then, my editor sent me a note. Back at the office, a colleague had discovered that the car belonged to Cate, and that he was a private investigator working for Interprobe.

The police told me Cate was registered, and as long as he stayed on public property, he could follow me.

As the police were leaving, I walked over to Cate’s car and we started chatting. He seemed uncomfortable. He told me Interprobe had hired him to follow me, but he repeatedly claimed he didn’t know why. He’d been told it wasn’t an adultery case, he said, and it had nothing to do with insurance fraud.

“I don’t know it!” Cate answered. The boss, he said, “wouldn’t tell me for some reason.”

“Does he normally tell you?”

I felt bad for Cate. He showed me his private investigator’s registration card and I photographed it. He’s been doing work like this since 1989, he told me. In 1994, he said, a car accident damaged his left eye, so he couldn’t try and work in law enforcement.

He seemed upset that I’d spotted him. “It’s very hard to follow people in the city,” he pointed out, apologetically. I’ve followed people myself, and I know he’s right.

I had to call the police, I told him. It was nothing personal, but he continued following me and I needed to know more about who he was.

“If I was in your position, I would have done the same thing,” he replied.

Soon my editor and I called Interprobe. The company responded that it was just a case of mistaken identity. Cate, in their version of events, hadn’t meant to follow me at all; he was just supposed to serve legal papers, not conduct surveillance. “You just fit the description of a witness we were trying to serve for an insurance fraud investigation,” said a woman who identified herself as the company’s office manager.

Later I talked to Kevin Hooks, the firm’s founder and president, who said the same thing: Cate was just acting as process server and got mixed up. “This is very routine in terms of following the wrong person,” he told me. “We have no interest in you.”

There was one major problem with that explanation: Cate never tried to serve me any papers. And when the police talked to him, he didn’t mention anything about being a process server.

I eventually asked Hooks if he could prove it. If there was a person who lived near me, who looked like me, who they were trying to serve papers to, then I welcomed them to show me the details. At first, Hooks said that sounded fair enough.

But later the Interprobe office manager told me via email that she couldn’t do that. She said an unnamed law firm that had hired them to serve the papers wouldn’t permit it.

To check out how plausible Interprobe’s story was, I called some local private investigators and asked them if it sounded like a case of mistaken identity. They were skeptical and believed I was the target of surveillance.

“There’s no way that I can conceive of an investigator following the wrong person, for several days, only to serve papers,” said John Morse of Morse Investigation Services in Richmond, Virginia. “You appear to be the subject of an investigation for whatever purpose. You have every right to be concerned. It’s intimidation for someone who’s a journalist.”

Philip Becnel, another local investigator, agreed. “It’s not likely that this involved process serving,” he said. “That’s a common thing that you would say to someone if you were caught.”

So who hired Interprobe? I have some theories. In the meantime, I’m checking my rearview mirror more than ever these days.